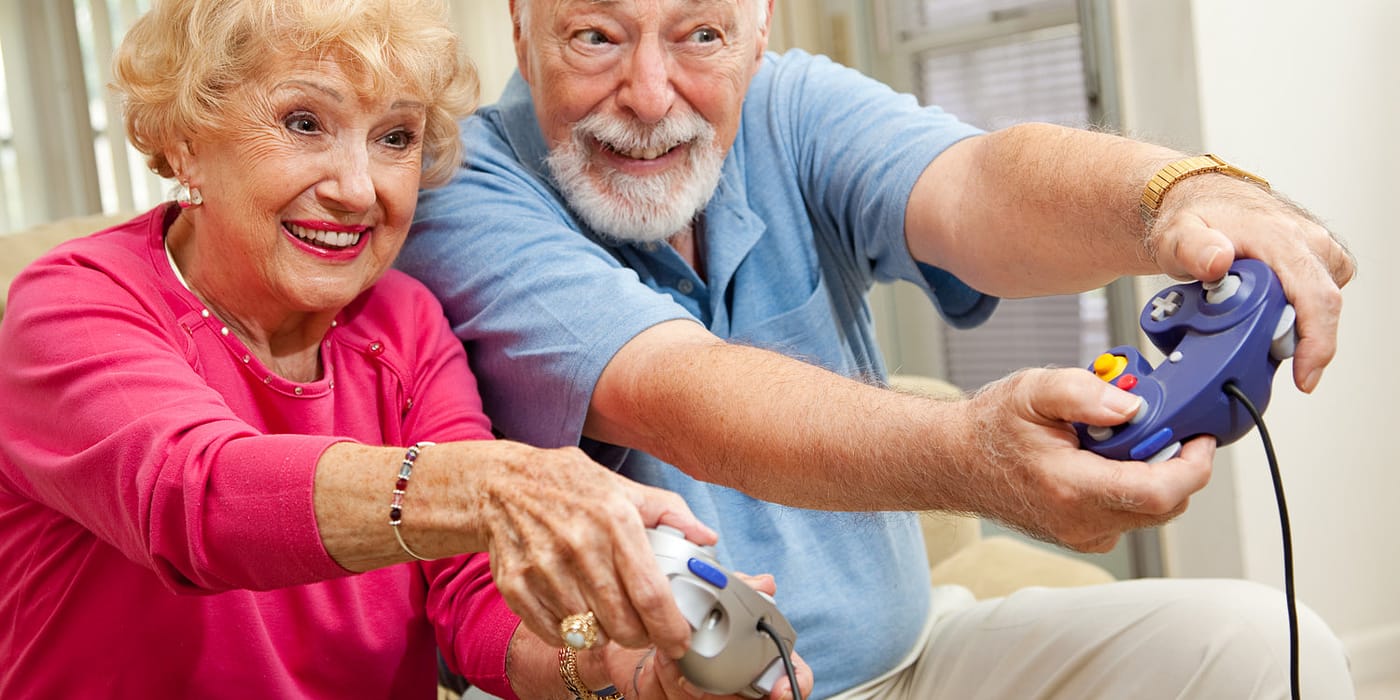 Video gaming usually drums up images of sticky teenagers in basements, surrounded by Coke cans and pizza boxes, staring at a television or computer screen into the wee hours of the night. Actually, while this is  still a common scene in many households across America, it does not take into account the full demographic of gamers. Remarkably, 26% of the gaming population is over the age of fifty. Think about it: that means that more than a quarter of all the people playing video games are a far cry from being sticky teenagers. It means that anybody can play video games.

In fact, video gaming among elders is a strong and steadily growing demographic. As it turns out, video games offer all sorts of benefits to seniors—from improving memory and coordination to encouraging community interaction. The myriad of benefits and entertainment that gaming provides is precisely the reason that places like Barnegat 67, a residence that offers senior living in Ocean County, NJ, are encouraging this fun pastime.

Here are a few of the benefits of gaming:

Gaming for the Mind

It has often been noted that playing games like Sudoku and crossword puzzles can help improve cognitive focus and memory in an aging mind. The same is true of video games. A study done at North Carolina University found improved spatial ability and cognitive focus in those who initially scored low on these tests after assigning 2 hours of playing World of Warcraft per day for two weeks.

Gaming has even been shown to reverse the aging of the brain. In a study done by University of California San Francisco, it was found that participants aged between 60 and 85 showed increased memory skills and attention span after playing a 3D driving game that involved pushing a button for certain stimuli but not others—in other words, it strengthened the ability to multitask.  The remarkable thing about the study was that the participants’ improved cognitive abilities were still strong six months after playing the game, which means playing games can have an impressive and lasting effect on the mind.

A game console like Nintendo Wii that involves literal body movement can also provide some necessary exercise. This is why many apartments for senior living in Ocean County, NJ and around the country include Nintendo Wii’s in the common space—it encourages physical activity and social interaction. Which brings us to gaming for community.

Gaming has been shown to be great for emotional health in part because it is a social activity. Games can be entertaining to play alone, but they are also a great way to connect. You know how much fun a board or card game can be when played with a group—because it brings people together in a healthy competition! It gets you talking, laughing and sharing an experience together. Today, you can even play a lot of games online with people who are not even in the same room!

If you’re over 55 and looking for a great community where you can connect with other residents, Barnegat 67 is a residence that offers senior living in Ocean County, NJ and may be right for you. You’ll find a fun and supportive community with beautiful common spaces, such as the rooftop lounge complete with a fire pit, bocce court, and dog run! It’s a great place to get out a Nintendo Wii and recruit players!

What Games Should I Play?

If you’re new to gaming, you might be overwhelmed with all the options. There are literally hundreds of games on the market. Where do you start?  Here are some specific suggestions for games that are popular among seniors, compiled by Barnegat 67, offering senior living in Ocean County, NJ.

Some of the games you may recognize as classics—they’re repeatedly updated and expanded upon for new consoles. Some of the suggested games are brand spanking new and can be played on your phone or computer. Give them a try and see what you think. You can always keep experimenting with new games after you have an idea of what sort of thing you like.

There are a few ways to play games electronically. Either you can download a game to your device (be it a tablet, iPhone or computer) or buy a gaming console which attaches to your TV. There are many consoles to choose from, including Nintendo Wii, PlayStation, and Xbox.

If you want to go online for your games, Pogo, Game House, and Big Fish are three popular online game sites. They offer a myriad of free games which is a great way to become familiar with what you like. They also offer the option to buy games to download to various platforms, such as a tablet or computer.

Also keep in mind that you don’t have to play new, unfamiliar games. Classics like Chess and Solitaire can also be enjoyed online or on a console! Or, if you want a simple game that is still rather fun, stretches your mind and supports a good cause, try freerice.com for a vocabulary game. For every definition you get right, you win rice, which is donated in real life to help stave off world hunger.

Farmville is a popular online game that allows you to get involved in agriculture from your computer. Controlling your brightly colored characters, you cultivate your farm through planting, tending and harvesting plants –and tend to the animals too!

Plants vs. Zombies is a strange name and concept, but pretty popular, nonetheless. It is also an online game. The objective is to place various plants and fungi, each their own superpower of sorts, around a house to stop an attack of zombies.

Wii Sports Resort is one of the most popular games on Nintendo Wii. It is especially suitable for physical movement and social interaction since it involves a remote that responds to your bodies movements and is played with others. Essentially, you can play sports, such as tennis,  on the screen, by controlling an avatar of your choice. It’s a great game to play with a group of people.

Disney Fantasia: Music Evolved is a beautiful game if you love music. Played on Xbox One and Xbox360, this game which is based on Fantasia responds to gestures timed to the music. Great for getting some physical movement into your day, and great for social interaction!

Rayman Legends is a popular adventure game available on a wide variety of consoles including Play Station, Xbox, and Nintendo consoles. You can also play on your PC! If you love imaginary creatures and using your mind to solve challenges, this is a great game that you can play alone or online with others.

The Legend of Zelda: Breath of the Wild is the newest in the Zelda series. Zelda has perhaps the greatest cult following in gaming history, and with good reason. This game is like a fantasy novel. It involves a deep and magical back story that is brought to life through beautiful visuals and high adventure. You’ll be flexing your mind muscles to solve the many puzzles hidden throughout the game, as well as practicing your hand-eye coordination to slay bad guys and get through obstacle courses.

You can play the newest Zelda on Wii U and Nintendo Switch, but playing any of the old Zeldas on any console will be fun (the Nintendo 64 chapter called The Legend of Zelda: Ocarina of Time, is especially recommended!).

Super Mario Run, is the newest in the classic Mario games made famous by Nintendo. Now on Apple iOS (so you can play it on your iPhone or tablet!), Super Mario Run is played by tapping the controls at the right time to collect coins, jump walls, squash enemies, as Mario continuously runs forward. Great for hand-eye coordination and easy fun. If you love Mario games as much as we do, also look to versions played on past Nintendo consoles such as the original Nintendo, Super Nintendo and Nintendo 64. All of them are super creative and fun. It just depends on what console you love the most!

Animal Crossing: New Leaf is like Farmville in that you build a village. It’s a sweet, friendly little game in which you become mayor and build an idyllic village through completing challenges such as fishing and catching butterflies.  It is played on Nintendo 3DS.

Brain Age: Concentration Training: As the name implies, this game is primarily geared towards cognitive training. Played on the Nintendo 3DS, this game will work your mind muscles with puzzles, math problems and more.

Gaming is good for so many things—including mind, body, and emotional health—but when it comes down to it, it’s just good fun and a great activity for senior living. Ocean County, NJresidents will be happy to know that Barnegat 67 is a fantastic, local community offering apartments for over

Have Fun Playing These Classic Games in Apartments for Rent in Ocean County, NJ

This Winter, Have Fun Playing These Classic Games in Apartments for Rent in Ocean County, NJ The apartments for rent…
in Uncategorized Posted by Barnegat 67 Team
December 11, 2019November 3, 2022

How to Stay Active this Winter for 55 and Over Communities in Barnegat, NJ

How to Stay Active this Winter for 55 and Over Communities in Barnegat NJ   Although the number of people…
in Uncategorized Posted by Barnegat 67 Team
December 4, 2019November 3, 2022

Spruce up your Apartments in Barnegat with Wintry Interior Design & Holiday Cheer!

Spruce up your Apartments in Barnegat with Wintry Interior Design & Holiday Cheer! Winter is upon us and with it…
in Uncategorized Posted by Barnegat 67 Team